Hypothermia -
Can you Train For Cold Water / Weather?
StewSmith.com

Many will argue about whether or not you are genetically wired to handle colder temperatures or can you build your stamina in lower temperatures by training in colder environment (water or land).  I believe it is a little bit of both.

When I was attending SEAL Training, the water off San Diego was brutal to new recruits.  Typically, water temperatures at best were 69 degrees during the warmest of the summer and dropped in the low 50’s in the winter.  Then in dive phase, at about 15 feet underwater, you would hit a thermo-cline and water temperature was in the low 40’s.  That was when BUD/S got cold, especially during a winter Dive Phase.

People often ask me, “What is the best way to train for the cold water at BUDS? Do I take ice baths, cold showers, sit in a pool for hours?”  For me, what I think helped me was hours of surfing / body surfing a few years prior to BUD/S.  Physical training such as swimming / surfing / playing in water temperature near those of San Diego is what I would recommend for short periods of time.  Do not let yourself get to a point where you are shaking uncontrollably or especially not shaking at all, as you can die if you play around with your core temperature.  Therefore, I do not recommend placing ice in a bath tub and dropping the water temperature Artic levels.  Colder showers are OK if you like mild torture, but the best way to train for colder water is to NOT take on such a dangerous challenge yourself.

Recently, it was shown on National Geographic Channel on the Fight Science

http://channel.nationalgeographic.com/channel/fightscience, I was tested on the Special Operations segment to conduct a combat obstacle course after having been immersed in 45 degree water until my body temperature dropped to near hypothermic levels.  Needless to say for this 38 year old fitness writer, it was painful, but I did abnormally well and surprised myself.  In fact, the physiologists monitoring my temperature and other vitals actually called me a “freak”.  However, this test was done with doctors, EMTs, physiologists, and thermal imagery professionals and is not meant to be duplicated by viewers on their own. Even the doctors did not know if the SEAL training or my genetic makeup enabled me to last longer in the colder water.  The physiologists even scientifically re-warmed me using a new device that gently re-warms the core through the hands and feet.  The following combat obstacle course went well too, reinforcing the theme of the show – Special Ops are special with intangible skills that are difficult to verbalize.

So, along with underwater swimming, swimming by yourself, and other potentially dangerous SEAL training events, getting used to cold water is NOT recommended for pre-SEAL candidates without supervision.  Train smart or you can kill yourself when not properly trained or have trained supervisors protecting you.  Besides, you will have a harder time keeping up with the runs, swims, obstacles courses, and PT on a daily basis than being cold anyway.  So focus on preparing hard physically, then rehab yourself by using ice on your joints. 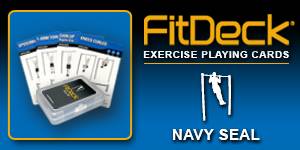